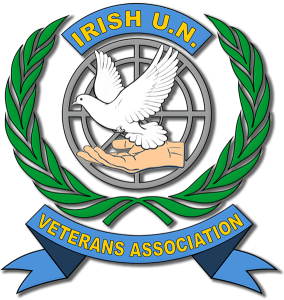 Organisation and Administration
The Irish United Nations Veterans Association (IUNVA) is organised and administered by National Executive Committee with a number of “Posts” throughout the country.  All appointments are voluntary and no members of the Association receive any salary or payment for work carried out.

The foundation of the Association
The Association was founded in Dublin in 1989 by serving and retired members of the Defence Forces. The Association soon spread countrywide. It was felt that the interests of veterans who had served their country on overseas service and had contributed significantly to world peace were not been satisfactorily addressed.The Association was formed at a meeting in Dublin on February 10th 1990, when an interim committee was formed. The Constitution of the Association was ratified at the first Annual General Meeting on the 6th October of the same year, at the Eastern Health Board Social Club, Grangegorman, Dublin, the constitution of IUNVA was ratified and the first National Executive Committee was elected as follows:

In the early days all meetings were held in a room in the Leisure Complex in St. Brendan’s Hospital until a suitable premise’s was rented in Stoneybatter, Dublin, which became the first HQ of IUNVA.  Niemba House, named to commemorate the Ambush of an Irish Patrol in the Congo
on 8th November 1960 it was officially opened by the Minister for Defence, the late Brian Lenihan, T.D. on 16th December 1990.

Old Schoolhouse Restoration Project Arbour Hill Dublin 7
Our HQ later moved to the Old School House and School Complex in Mount Temple Road Arbour Hill. The building which is “listed” has been leased to us by the Minister of Defence.
The main objective was to move its HQ into this building and create an environment that incorporated offices, meeting rooms, toilet and kitchen facilities and to include social rooms for members.

Museum
Our association had a considerable amount of memorabilia, so a decision was taken to create a museum which now displays a vast array of United Nations peacekeeping and associated items that that ilustrate the history of the various missions that the Defence Forces undertook over the years. The museum also offers visitors an insight into the history, defining moments and current status of our posts countrywide.
Booking Form to visit  is available here

Arbour House and The Memorial Garden
Arbour House was originally the Garrison school principal’s house during the British occupation. It later became the caretaker’s house for the person responsible for looking after the graveyard in Arbour Hill. When the Headquarters of IUNVA was in Stoneybatter, it became quite a burden to keep paying the rent each week as funds were scarce in the early days. Some members had to put their hands in their pockets to help pay the expenses.
Mr. Joe Clohssey (RIP), a member of Post 1 who worked as an usher in Government Buildings, used all his powers of persuasion in getting Arbour House (on lease) from then Minister of State, Mr. Noel Treacy, T.D. and the OPW.

The Association was very pleased to get the keys, even though they knew a serious challenge lay ahead as the building was in a dilapidated state. Having been unoccupied for many years it required serious work to make it habitable.

The members relished the challenge and were fortunate in having within their ranks members with the various skills required to get the house in shape. After several months of blood, sweat and tears the transformation of the house, which included the building of a new kitchen, was completed. It was a remarkable achievement and one in which all who were involved could feel justifiably proud.

Next on the list was the garden in front of the house which was the property of Dublin Corporation. This was once used by residents living in the area as vegetable plots but, because it hadn’t been looked after for several years, it had become very overgrown with vegetation.

Contact was made with Mr. Gerry Barry, Superintendent Parks Department, Dublin Corporation, informing him of our plans to open a Memorial Garden and that the garden in front of Arbour House, was the ideal location.

The request was granted and the site was handed over. However, not only did they hand over the garden, they also agreed to landscape it. Roadstone generously came on board and laid the pathways around the garden.

The cost of the Memorial Stone was paid through funds raised by the members. The Memorial Garden was officially opened by President Mary McAleese on the 8th November, 1998. IUNVA now had a new HQ with a Memorial Garden located in one of the most historic areas of Dublin City – Arbour Hill.

The first meeting on record in the new HQ first took place in the schoolhouse on Tuesday 24th October 2000 at 20.00hrs

Monuments and Memorials
Monuments have been erected to the memory of our fallen comrades in the following locations:

Wreath laying ceremonies are held at these locations on an Annual basis.

Graves for veterans who have served overseas and have nobody to lay them to rest are located at:

As veterans of UN operations world-wide, IUNVA will continue to support our soldiers, Gardai and civilian personnel who serve in often dangerous and difficult circumstances. We hope that our country will also keep our traditions of service to peace in being.

We have contributed to over 60 years of peacekeeping with courage and tenacity. Our casualties have been many. Our dead are commemorated at Arbour Hill, and at other locations countrywide; but we must also remember the many who have been scarred, both physically and psychologically by their service overseas. We must continue to help these veterans and their families. That is why we were formed – let us not forget them.  We hold the World Record for UN service in that Ireland has had UN Peace Keepers on duty every day since 1958.

A problem shared can be a problem solved
Members of IUNVA or ex-soldiers who are experiencing problems due to domestic circumstances, depression and anxiety, suicidal thoughts or actions, financial difficulties or medical conditions can contact IUNVA for advice or assistance.  This will be treated in a very professional and confidential manner and details will not be disclosed or discussed outside the role of Welfare Officer.  You may not like to approach your own local Post Welfare Officer for personal reasons; you can contact the National Welfare Officer HQ IUNVA or a member of National Executive Committee whom you may know.  These details will not be communicated or discussed with your Post they will be dealt with at HQ level. Your case will be treated with high standards to ensure the privacy and confidentiality of that information, strictly in accordance with the Data Protection Acts, 1988 and 2003.  If you have a problem do NOT hesitate to make contact. postage total €4.00 through donate button on the site.  Please leave name and address when ordering. Theses may also be ordered by post From Michael Thompson, Post 27, R.D.F. Building, Abbeyleix Road. Portlaoise, County Laois. Cost €3.00 plus €1.00 postage, Total cost €4.00 per badge ordered. No cash through post please and all cheques made out to IUNVA. Association wrist bands also available from Michael at €2.00 each plus €1.00 postage.

IUNVA has the approval by the Minister of Defence, and is non-denominational, non-political and non-sectarian. Our Constitution was legally authenticated and ratified at the Annual General Convention on 23rd September 2017.  IUNVA is a Registered Charity – Number 20025397. We are also listed in Defence Forces White Paper. See Our Promotion Video under Galleries Video. The IUNVA Logo is registered with Patents Office and is a Registered Trade Mark – Number 167979 and cannot be used by third parties without our express written permission.