The is the second article to cover the deaths of 36 Inf Bn personnel in Elisabethville in Dec 1961.

The first article on the deaths of Irishmen during Operation Unokat mentioned the wounding of Sgt Patrick Mulcahy and four men from A Coy 36 Inf Bn by shrapnel from mortar fire that killed Cpl Michael Fallon on Friday 8 Dec. 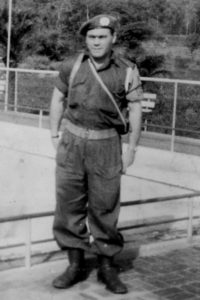 Having received medical attention, Sgt Mulcahy insisted on re-joining his platoon.  Four days later, on Tuesday 12 Dec, Sgt Mulcahy was wounded for a second time by mortar fire and died of his injuries on Saturday 16 Dec, the day 36 Inf Bn mounted Operation Sarsfield to seize the Kasenga Tunnel.

Sgt Mulcahy was a native of Thurles, County Tipperary, he joined the Army during the Emergency in 1943 and he served with 1 Fd Arty Regt until Nov 1945.  He re-enlisted in Nov 1946 and served with Dep Arty, 2 Fd Arty Regt and 6 Fd Arty Regt.  He was a gunnery instructor on a variety of weapons in service in the Arty Corps and he was promoted to the rank of Sgt in Apr 1958. He was 36 years of age when he was killed.  He lived at McKee Pk Blackhorse Ave Dublin with his wife Marie and their four children.  He departed Dublin on 18 Nov 1961 as a member of the Advance Party of 19 Officers, 24 NCOs and 7 Ptes.  It took them all of four days to reach their destination in Elisabethville.

Sgt Mulcahy along with Lt Patrick Riordan and Pte Andrew Wickham, who were killed in the Battle of the Tunnel, were buried in Glasnevin Cemetery on 4 Jan 1962 after requiem mass at the Church of the Sacred Heart, Arbour Hill. The chief mourners were his widow Marie, Nora Mulcahy, his mother and Michael Tobin.

He was posthumously awarded with Distinguished Service Medal which was accepted by his widow, Mrs Marie Mulcahy.  The citation reads:

“For distinguished service with the United Nations Force in the Republic of the Congo, in displaying leadership and devotion to duty to a high degree.  Although painfully wounded during hostilities in December 1961, he refused to leave his platoon and subsequently whilst looking after his men, he received the wound from which he died.”

In June 1998, the Minister for Defence Michael Smith TD presented An Realt Míleata (The Military Star) to the next-of-kin of thirty six members of the DF who were killed in hostile circumstances while on military services overseas.  This was the first occasion in the history of the state that this medal was awarded.  The Military Star was awarded posthumously to Sgt Patrick Mulcahy DSM and was accepted on behalf of the Mulcahy Family by his son (then) CQMS Danny Mulcahy, from the Minister and the Chief of Staff, Lt Gen David Stapleton at a ceremony in Collins Bks Dublin.

The Military Star is posthumously awarded to personnel of the Permanent Defence Force or the Chaplaincy Service, killed or fatally wounded in hostile action while in the course of service outside the State or within the State on approved military duties.

Sgt Mulcahy has a very proud artilleryman and, over the last six decades, his former comrades from A Coy 36 Inf Bn and the Arty Corps have kept alive the memory of his sacrifice.  In 1965, a plaque was erected in his honour at Magee Bks Kildare.

This year, 2 Bde Arty Regt, instead of using a numeral for their recruit Pl named it as the Sgt Paddy Mulcahy DSM Platoon to honour the bravery and sacrifice of Sgt Mulcahy and to mark the 60th anniversary of his death.  His son, BQMS Danny Mulcahy (Retd), visited the platoon during training in Custume Bks Athlone and he delivered a lecture on his father’s service and his death in Elisabethville.  He was invited as the guest of honour at the passing out parade and as the young soldiers deployed throughout 2 Bde, they brought with them the history of one brave peacekeeper who made the supreme sacrifice.